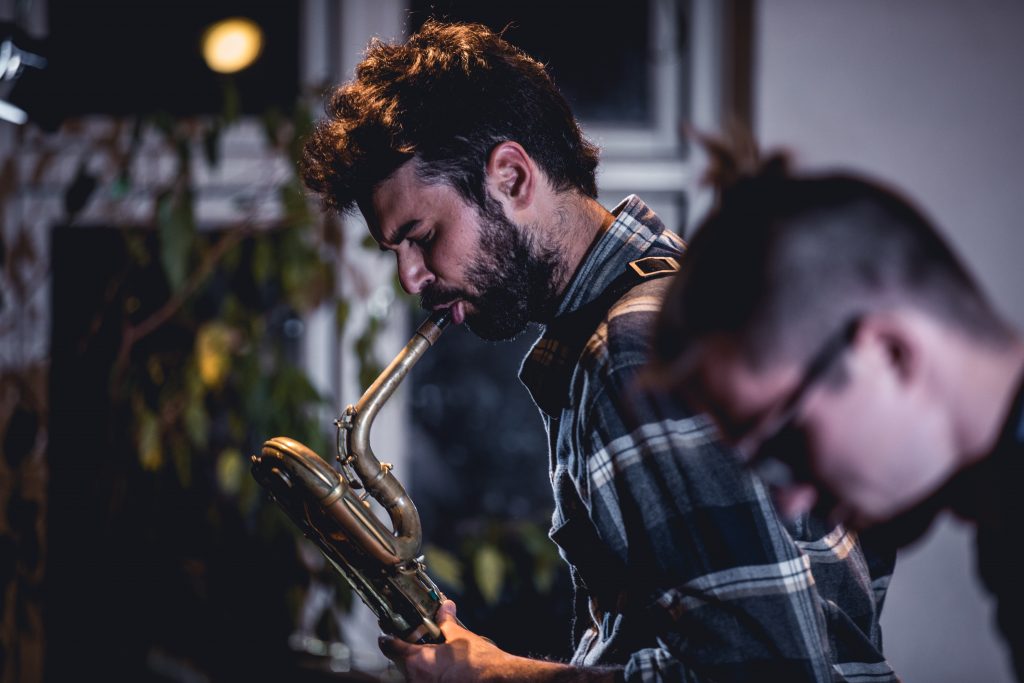 Tiny Sound is a collaboration between baritone saxophonist Giuseppe Doronzo (IT) and sound artist Morten Poulsen (DK) who performs on an electro-acoustic suitcase. Brought together by a common interest in viewing music as an unfolding of textural sonic environments and with a dedicated artistic study of the sound potential of their respective instruments, they create unique concerts based on organized improvisation.

The sonic potentials of the instrument

In his study of the baritone saxophone, Giuseppe Doronzo has established a personal library of more than 170 multi-phonics, enabling him to play between two and up to five notes simultaneously.With the creation of a polyphony inspired by Tibetan and Mongolian overtone singing, he uses extended techniques to sing a melody based on a particular overtone sequence while also playing the fundamental tone.

For this collaboration, Morten Poulsen has build an electro-acoustic suitcase, inspired by the greek philosopher Pythagoras, who taught behind a curtain for his presence not to distract his students from his message. This created the concept of “the acousmatic voice”; a voice to be heard without seeing its source. At live concerts  it is often a reflex to look for the source of the sound and to directly connect what we hear to what we see. With the electro-acoustic suitcase, it is the intention to encourage the audience to experience the sound without visual cues and thus raising the listening in itself to a higher priority.The suitcase contains a carefully selected collection of small objects that produce a tiny sound which is then enhanced by home-built microphones.

Together, the musicians create a form of macro-music; just like a macro-lens on a camera, that zooms in to reveal textures which are impossible to see for the naked eye, the duo uses extended instrument techniques and piezo microphones to amplify, reveal and explore the texture of specific sounds.

At the live performances, Giuseppe and Mortens’ instrumental explorations culminates in a creative process they describe as “organized improvisation”. This means that prior to the concert, the musicians have noted and categorized the individual sounds and their timbre, form, mental references (ie. what the sound reminds us of), mood, etc. These categories are then structured into sonic environments based on how individual sounds compliment each other. Eventually, these sonic environments are being organized into the final concert form, where the musicians move between each of these sonic environments.

Instead of focusing on the traditional musical hierarchical division of harmony, melody, rhythm, text or even musical narrative used in other improvised music, Tiny Sounds organizes their concerts according to parameters like timbre, range, memory, association, etc.
Tiny Sound creates a concert format that puts together a philosophical frame of understanding and in-depth sound study with a concert format that lies between improvisation and composition.

Photo and video by Lucas Illanes